According to two different sources the rent growth in the Triad in 2019 was among the highest in the nation. The Triad Business Journal looked at data from RealPage:

Average rent increased 4.8 percent in the Greensboro/Winston-Salem market in 2019 — fourth-highest in the nation among "large metros," according to the latest RealPage's Apartment Market Performance Report.

The average rent in the Greensboro/Winston-Salem market was $879, according to the report. The report indicated demand for apartments in the market — average occupancy was 95.9 percent, and 1,440 new units were completed during the year...

Phoenix (8.1 percent), Las Vegas (5.7) and Nashville (5.2) ranked ahead of Greensboro/Winston-Salem. The Charlotte and Raleigh markets tied for sixth at 4.5.

Yardi's Matrix Multifamily National Report for December showed similar numbers for year-over-year rent growth in November. As you can see from the table below they calculate the Triad's rent growth at 4.7% overall. They group the Triad in the "Other" category, so the table doesn't show the comparison with the Top 30 metros of which Charlotte and Raleigh are included. They forecast Charlotte's rent growth to be 4.8% and Raleigh's to be 4.9%. 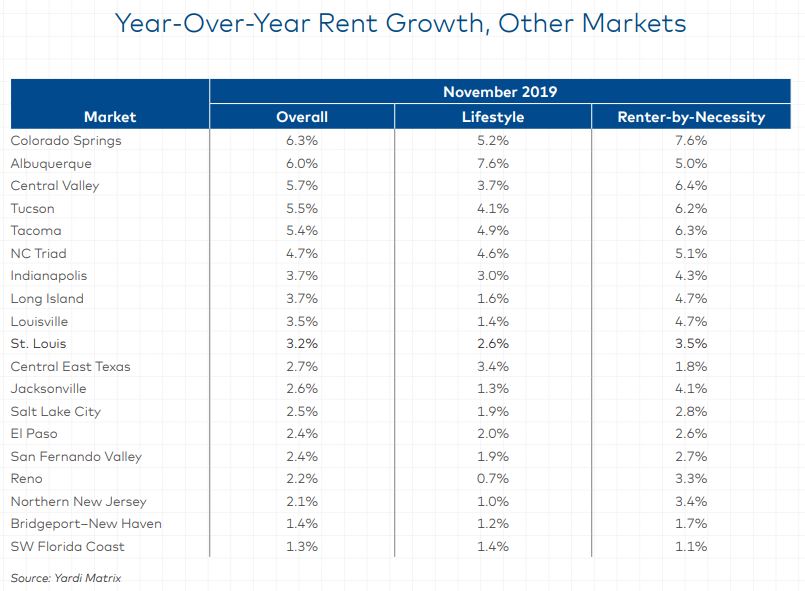