Rental Markets Cool Down in Many Large US Cities

Cities that were experiencing very strong rent growth just two or three years ago are now experiencing flat year-over-year growth and in some cases even year-over-year declines. Some of this shift can be attributed to red-hot construction volume, and some can be attributed to other factors like millennials (finally) moving into homeownership in significant numbers. From Bloomberg:

Tenants are gaining the upper hand in urban centers across the U.S. as new amenity-rich apartment buildings, constructed in response to big rent gains in previous years, are forced to fight for customers. Rents are softening most on the high end and within city limits, Terrazas said. Landlords also have been losing customers to homeownership as millennials strike out on their own, often moving to more affordable suburbs…

U.S. multifamily apartment construction for the past few years have been at levels not seen since the 1980s and rapid rent gains have also encouraged owners of single-family homes and condos to fill them with tenants. Projects opening now were conceived by developers a few years ago when rent gains in the U.S. were peaking at an annual gain of 6.6 percent, according to Zillow data.

The most expensive markets slowed first as new supply became available and tenants struggled to afford rapidly-rising lease rates. Rents in the San Francisco area jumped 19 percent in the year through July 2015. Now, they have been flat since last July. New York rents, which were up 7 percent in 2015, have been decelerating for a couple years, declining 0.4 percent in July.

The two largest metro areas in North Carolina are a part of the trend: 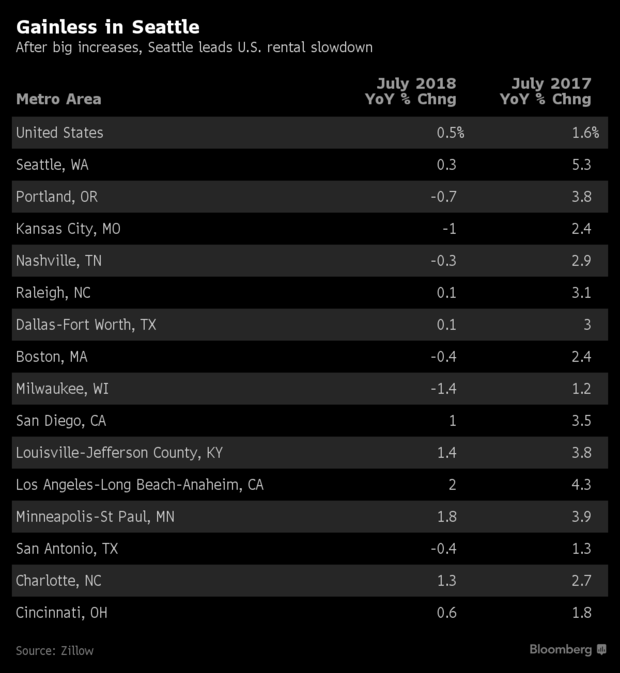 Preparing Your Property for Hurricane FlorenceSeptember 10, 2018 Five local companies are among the 25 in the nation of best places to work in multifamilyDecember 19, 2017